Propolis – not all bee glues are created equal

Propolis – not all bee glues are created equal

A complex mixture such as propolis can vary considerably by source

Propolis is a pretty well-known antimicrobial natural supplement that has been around for about as long as humans have been making the effort to write things down. It has a history of use by the Romans, Ancient Egyptians, and the Ancient Greeks – all of which knew it for its antimicrobial properties (even though they did not yet even truly know what microbes were at that point). It was even used in the embalming process by Ancient Egyptians to assist in the preservation of their mummies.

While propolis did fall out of favour in the middle-ages it has made a huge comeback in the modern era. With the outbreak of the COVID-19 pandemic there has been a surge in propolis sales across the world as people have been seeking something which might assist in keeping their bodies in the best possible state to resist infection. While propolis cannot really “boost” the immune system, it does indeed have a proven effect in terms of its ability to fend off microbes at concentrations which can be attained by regular use of the supplement – and has been proven to help deal with microbial issues such as gingivitis (an oral infection) and giardiasis (an intestinal infection).

But here’s the thing: propolis is a product of the environment it is produced from as much as it is a product of bees. The reason for this is that propolis itself is a complex mixture of polyphenol substances taken from plants that the bees encounter while out foraging for much-needed supplies. This means that even if the specific hive of bees producing the propolis remains exactly the same and the plants surrounding this hive were simply changed – the propolis produced by the hive would change accordingly.

As such not all propolis is the same, and some can be vastly less useful than others in providing the benefits one might seek from propolis. To investigate this variability researchers took samples of propolis from various sources so they could be analysed and compared to see how they might differ. In this case the sources of the propolis were from the Czech Republic, Germany, and Ireland.

So how did the different Propolises differ from each other? 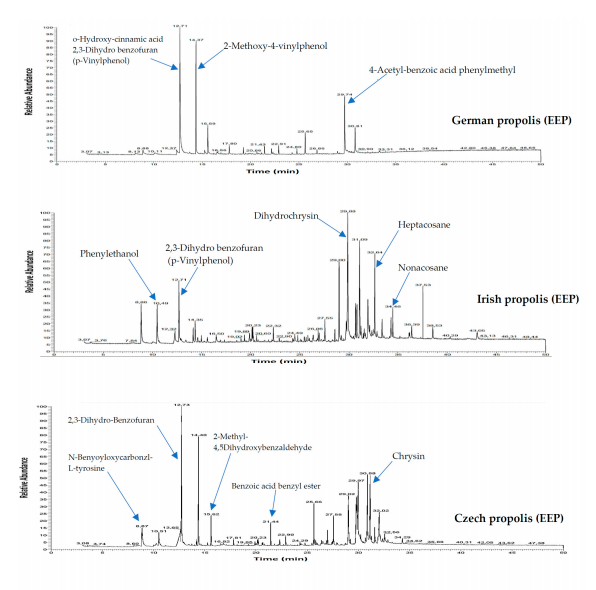 A lot, to say the least – as can be seen on their chemical profiles as determined by analysis with a mass spectrometer. Now the exact details of these differences are less important than what those differences translate to for the person using the propolis. Since the substances propolis is made out of can vary in how well they act as antimicrobials this means that composition can have a massive effect of if the propolis can work or not.

What the study found when these different extracts were tested was exactly that – propolis extracts ranged from almost useless in fighting microorganisms to being on par with some modern antibiotics. Irish propolis exhibited the most powerful activity in this regard, and completely outclassed the German and Czech solutions.

Of equal interest is how this study has also shown that water-based propolis extracts retain almost none of the anti-microbial power contained in the propolis, which ethanol- or alcohol-based extracts in turn do manage to provide these positive benefits.

What is the lesson in all this?

As with anything good – know your sources and make sure those sources actually understand the difference between a useless solution of inert byproducts and a powerful concentrate. Ask questions when purchasing any health product, because no honest salesman would ever shy away from giving you proper answers they can back up with research and a clear understanding, as opposed to vague explanations aimed only at relieving you of your money.

All search results
Eskom sucks and so does Loadshedding

Due to the heavy nationwide loadshedding and the fact that we are situated in the countryside where infrastructure is less than optimal we may experience intermittent internet during these periods.

We promise to get to anything and everything, but it can sometimes take a little longer than we’d prefer.