There’s a new treatment for cancer and it’s neither plant nor animal. Chaga (inonotus obliquus) is a wood-rotting mushroom that grows on birch trees. Strangely, it is said to have a DNA structure that is 30% more human than plant!

Birch trees take 15-20 years to reach maturity. During that time, the Chaga mushroom absorbs and concentrates many valuable enzymes, nutrients and healing compounds that are bioavailable to the human body.

Chaga grows primarily in Russia, but also in parts of Japan, Korea, Alaska, Canada and northern Scandinavia. And although Chaga is found on your typical white birch tree, the most potent variation is found on the black birch trees of Siberia.

Superfood is a word hot on everyone’s tongue these days, but right about now, you can’t use that buzz word without mentioning Chaga. It’s known as the “King of Herbs” and a “Gift from God” by many and after seeing it’s jaw-dropping antioxidant value, there’s no doubt why.

Wild-harvested chaga mushrooms not only have the highest antioxidant levels in the mushroom kingdom, but of any known food known to man (as tested by the USDA and Tufts University in Boston, MA). 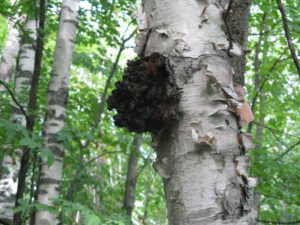 When I first saw an image of this polypore fungus, it looked like a giant mole…one with melanoma. And if you know about the ‘Doctrine of Signatures’, it essentially says, if a food looks like a body part, then it can be taken for a healing effect on that part of the body. Like a walnut, for example, bares a striking resemblance to the brain and as we all know, walnuts are high in Omega-3’s (important for proper brain function and health).

Turns out there’s no better treatment for melanoma than Chaga. Approximately 25 percent of the pigments in Chaga are melanin (a really high amount). Melanin is important for the health of the skin and hair with its protective properties and its ability to target free radicals and help with sleep.

Though new to many of us, Chaga has actually been used as a folk remedy for more than (a documented) 4,600 years. The uses for Chaga spans a wide range of health problems including:

Recent studies have shown Chaga to have anti-tumor and antiviral properties, effectiveness against influenza and various cancer cells and is being heavily researched and studied for the treatment of HIV.

The World Trade Organization (WTO) has even classified Chaga as a medicinal mushroom under WTO codes.