Pesticide Use Yields Larger Crops At The High Cost Of Health

Pesticide Use Yields Larger Crops At The High Cost Of Health

Roundup is a glyphosate-based herbicide developed in the 1970s by Monsanto. Glyphosate is the most widely used herbicide in the world. Since 1974, 1.8 million TONS have been sprayed in America alone (imagine how much it would be once you count all of our imported foods!).[1]

How Glyphosate Gets On Your Plate

To avoid using a grain dryer and to force plants to mature faster, farmers employed a new use of pesticides starting back in the 1980s. Pre-harvest crop desiccation: spraying with glyphosate three to seven days before harvestingcrops. Over 50 percent of all dietary exposure is due to this practice.

Just imagine, the crops are being sprayed just before the food arrives at our tables.

“Wheat-based products are showing up with a lot of glyphosate on them, and glyphosate interferes with protein digestion,” says Stephanie Seneff, a senior research scientist at the Massachusetts Institute of Technology.

A judge ordered Monsanto to pay $78 million, an award that was reduced from the jury’s original $289 million. This was awarded to a groundskeeper who continuously used Roundup herbicide while working at a school. Dewayne Johnson developed non-Hodgkin’s lymphoma. Three expert scientists testified in the case that the disease is linked to glyphosate exposure. The jury found the widely used herbicide contributed to his condition.

What then should consumers be aware of when choosing food for their families?

Pesticide Culprits: Which Foods Have Glyphosate Content In Them?

There is mounting evidence that glyphosphate is making its way into everyday foods. While some of the findings are speculative or deemed not “official” by the FDA, they are still worrisome:

The Dirty dozen plus list, developed by the Environmental Working Group (EWG), brings to light conventionally grown foods with the highest quantity and/or concentration of various pesticides.

Spinach had quite high concentrations of permethrin, a neurotoxin and 80 percent of apples tested contained diphenylamine (banned in Europe).

Out of all crops, potatoes contained the most pesticides by weight. Chlorpropham is the highest detected pesticides on potatoes.

After reading the above list, you may be asking yourself: So, what canI eat?

Studies on conventionally grown food show an overwhelming presence of pesticides. However, the same study done on GM soybeans was performed on organic soybeans. The organic samples tested negative for glyphosates.

You can go chemical free by growing your own vegetables, fruits, and herbs. Join a community garden like the one in a neighborhood in Detroit, Michigan. Check out these tips for perennial vegetables you can plant in your own garden. Choose organic produce from the grocery store. Shop your local Farmers’ Market. You can also choose to eat from the “Clean 15” list, created by the EWG to represent which foods have the lowest risk of pesticide exposure even if you don’t buy organic: 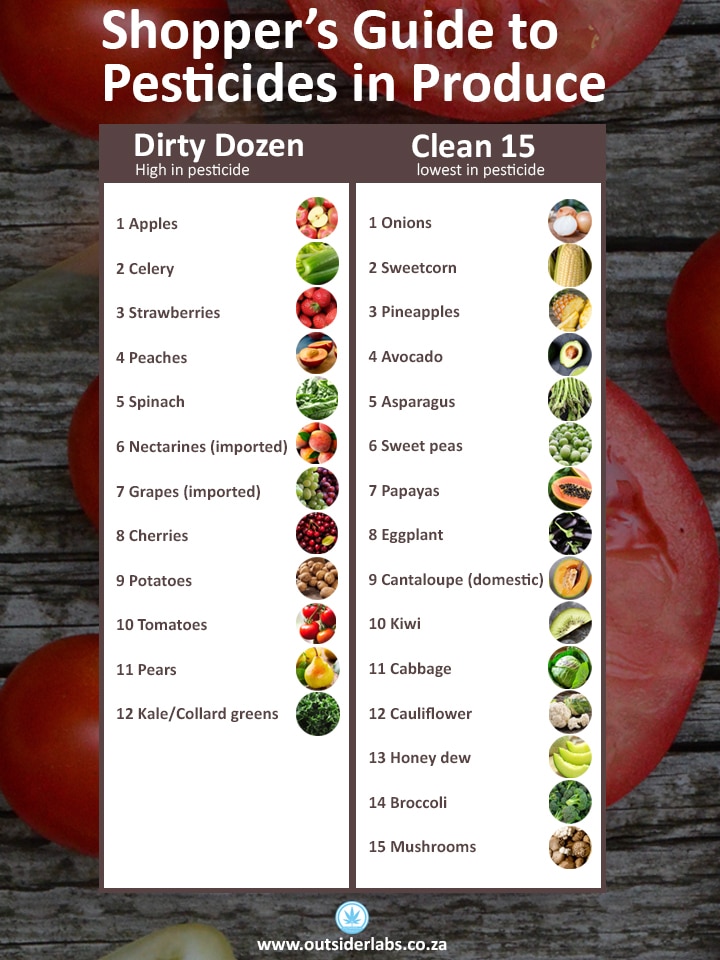