Harvest season is upon North America and in the cannabis-growing heartlands of inland Northern California, there’s a new fall shortage: dry ice.

Over the last six years, the idea of freezing part—or all—of one’s cannabis harvest has gone from bizarre to mandatory. A full 30% of Alien Labs’ coveted new strain Planet Dosi is heading straight from outdoor fields into the freezer this year.

Ben Grambergu at Grambergu Marketing in Northern California says: “A couple years ago, if you told someone you were going to freeze 100% of your crop, they’d tell you you were crazy. Now, we’re seeing 100% frozen harvests, and really large farms: 8,000-pound harvests. It’s totally taken over.”

Driving this trend is consumers. They want pure, high-THC cannabis extracts in sleek vape pens that are easy to dose and don’t smell. Farmers have responded by buying up industrial freezers—plus using dry ice in the fields—and are sending the frozen crops straight to extract labs, skipping the traditional harvesting process.

Vigorous competition puts enormous pressure on farmers, squeezing their profit margins and making farming vastly more efficient. Fresh-freezing saves tons of cash on harvesting man-hours and drying rooms. “It eliminates whole steps,” said Rosenthal. “The more sophisticated the farmer, the more likely they are to do that.”

To get to pure extracts at low cost, farmers have flipped the millenia-old process of harvesting on its head.

In the spring, farmers in the Northern Hemisphere sew the fast-growing crop. In fall, farmers harvest buds at peak ripeness, when aromas and cannabinoids—like THC—near peak levels.

You get smokeable flower by chopping down the ripe plant and air drying its buds in a cool, dry, dark room for about ten days. Weeks or months of curing can follow to perfect the smell and taste of boutique bud.

Traditional air drying is a battle against temperature and humidity spikes to avoid mold and fungus and preserve precious terpenes and THC.

But farmers are increasingly saying ‘Screw all that’ with fresh-frozen. They chop plants, remove the leaves, branches, and stems, and vacuum seal buds in thick plastic pillows weighing two to four pounds. Those pillows go into in an industrial freezer at -38°F, and the low temperatures lock in everything for processing at a later date: flavors and terpenes, cannabinoids (THC, CBD, etc.), as well as all the water.

“You’re not worried about degradation as much [in the plastic pillows],” said Grambergu. “The shelf life on that versus a regular pound in a turkey bag are very different.”

Getting from frozen buds to live resin

Technicians finely grind the frozen buds into a powder, pack pounds of it in thick, stainless steel tubes, and blast a solvent like butane through it, which pulls out all the fresh-frozen terpenes and cannabinoids. Water crystallizes and separates from the plant material.

The result is a freezing cold, golden liquid. Technicians then purge the solvent, leaving behind concentrate, which is usually four or five times stronger than flower.

This extract goes into what’s taken over the concentrate scene—live resin, which is used in dab rigs and pens, as well as pre-filled live resin vaporizer cartridges like Loudpack’s Mimosa pod for the Pax Era. “Live resin is what’s driving this,” said Grambergu.

Live resin makes up some of the most aromatic cannabis products. And the smell is far less stinky than lighting up some flower.

“It comes down to ease of use,” Lidie said. “As new consumers enter the market, they don’t necessarily want to reek of pot… I can dab in my office and it doesn’t permeate through my whole home. If I smoke a joint, the whole house is going to stink.”

Effects from fresh-frozen extracts may be different too. Cannabinoids stay at peak levels with almost no degradation. Freezing preserves terpenes that would otherwise be lost to weeks of drying and curing. 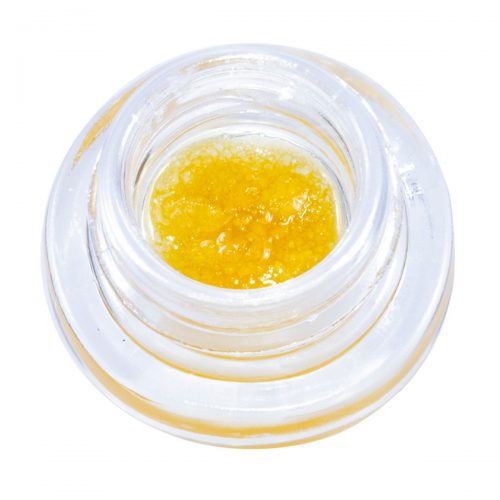 “In general the feeling you get is revolutionary,” said Tracee McAfee, CEO of Cryo Cure, a Michigan-based cannabis freeze-dryer start-up. “It’s smooth, uplifting, sparkly, creative, and social, with no couchlock effect and no crash.”

Beyond some of the best, terpiest dabs, fresh-frozen harvests help power the vast manufactured goods market for THC-infused food, drink, candy, topicals, and tinctures. Many farmers elect to send their entire harvest straight to oil, also known as distillate.

Fresh-frozen is changing cannabis farming beyond just growing for the dankest bud. Terrible-looking flower might have great terpenes and go into edibles. Farmers are sending the A-grade buds to the drying room, while freezing all the B-grade buds, small budlets, and re-growth on outdoor plants after the initial harvest, said Grambergu.

And farmers are moving past the annual harvest cycle in the fall to also grow small, short, winter cannabis crops in greenhouses just for extracts, said DiPaci.

Rosenthal notes that such manufactured products were the bulk of the market before prohibition began in the ‘30s. “The whole reason we got to smoking flower was because it didn’t require as much processing, which you could not do when it was illegal.”

For some extract aficionados, mere live resin won’t cut it—they’ve moved onto live rosin, which comes from fresh-frozen cannabis extracts untouched by butane or any other solvent.

Company Paradiso has partnered with boutique brand Fields to release limited, artisanal runs of extracts using this process. Paradiso wet trims and freezes the best one percent of its harvest—its Grandiflora and Zkittlez strains—using a surge of 20 trimmers working fast, instead of the usual dry trim team of nine. “It’s much more labor intensive,” DiPaci said.

Companies like Blue River have perfected trade-secret techniques to extract cannabinoids and terpenes from frozen cannabis while leaving everything else behind. They’re using aspects of sublimation—where water gets removed through freezing instead of drying—and they’re using mechanical separation techniques. It’s very time-intensive and requires such high-quality materials that the resulting extract is worth four times more per gram than gold—for example, Synergy’s Strawnanna Mochi Flan is going for $165.

“It creates the best extract in the market. It’s much more labor intensive and there’s less return. That’s why it’s so expensive,” said Grambergu. “One of the coolest parts about cannabis is experimentation. Every farmer has always been curious about ‘What happens if you do this or that?’ Clearly freezing is one of the methods that has broken through and proven to be worth their time. I think we will continue to see farms move more and more toward this.”